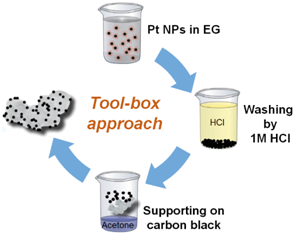 We developed a “tool-box” synthesis approach based on “surfactant-free” colloidal nanoparticles in alkaline ethylene glycol. The key advantage over conventional synthesis approaches is that the catalyst properties (particle size, metal loading, support type, etc.) can be changed and optimized independent of each other. Therefore, the approach is ideally suited to systematically investigate complex phenomena, such as the particle size or the particle proximity effect of catalytic processes. This work is mainly done in close collaboration with the group of Dr. Sebastian Kunz in Bremen.

We investigate nanoporous metal alloy films as support free catalysts. The key point is to combine a high specific activity, as known for bulk alloys, with high surface area and a porous structure for reactant transport. The films are prepared in the group of Dr. Volker Brüser at the INP Greifswald by alternating magnetron sputtering of a noble and a non-noble component and subsequent acid leaching of the non-noble component. We test the catalytic performance as well as the stability of the nanoporous metal alloy films. Using synchrotron radiation, the films are characterized ex-situ and in-situ by X-ray absorption measurements (collaboration with Prof. Mehtap Oezaslan, Oldenburg). 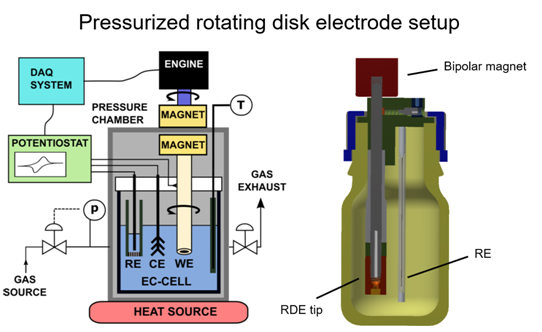 Mass transport is a key issue in electrocatalysis. The measured reaction rate is influenced by the “kinetics” (this we would like to extract) as well as mass transport. In academic electrocatalysis research the reactant is usually dissolved in the liquid electrolyte. In case of gaseous reactants such as oxygen or carbon dioxide due to the low gas solubility in the electrolyte, mass transport can significantly influence the measured reaction rates. Thus, the kinetics can only be investigated in a very limited potential range where small reaction rates occur.